Written in 1969 this is one of Peter Maxwell Davies’s classic works of concert-hall music theatre. An extraordinarily dramatic, multi-layered fusion of dance and music, its shape superimposes the 14 stations of the Cross on a series of 16th-century anatomical drawings by Vesalius, with a dancer and a solo cellist as the protagonists.

Scored for the classic Fires of London Sextet line-up the work is ﬁlled with unconventional percussion instruments, a honky tonk piano and much allusion to foxtrots as well as medieval and renaissance music.

In contrast to the vibrant sonorities of Vesalii Icones, this work can be presented with a  first half featuring the atmospheric piano works inspired by Persia and written during the First World War by the proliﬁc French composer Charles Koechlin. 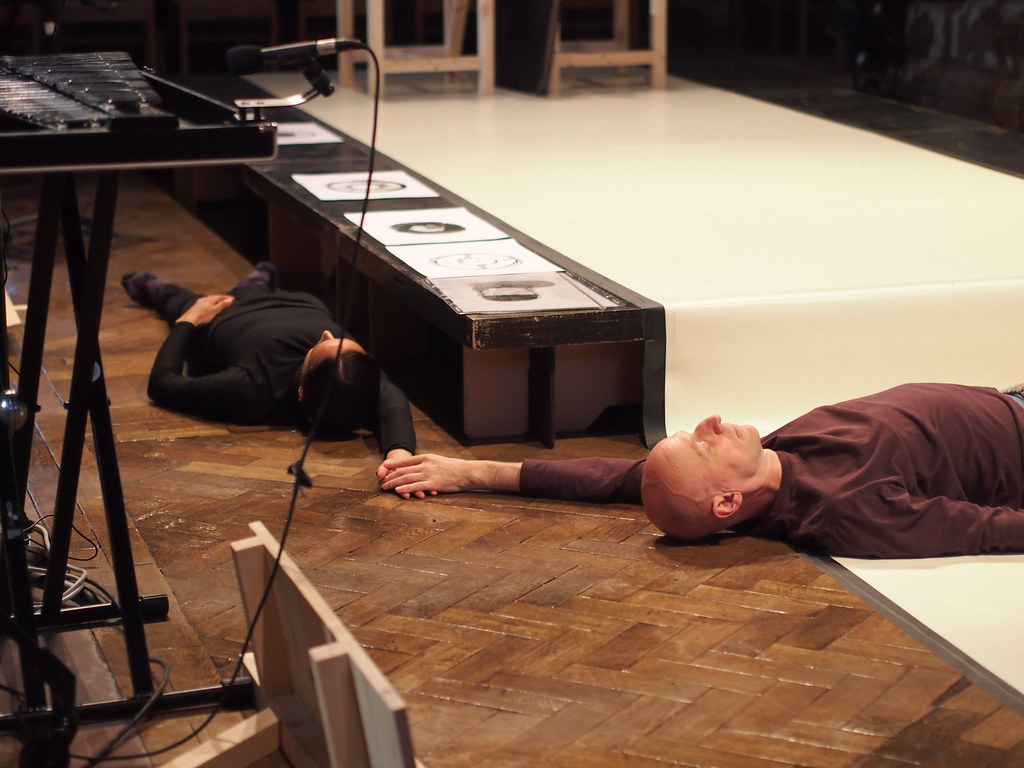 Vesalii Iconesis non-domestic listening. Don’t try this – or its topics of dissection and martyrdom – at home, as this music is more than usually vindicated by shared witness. The actions of a dancer are something additional to witness. They effect the way the live music is heard.

For each re-staging of Vesalii Icones, a choreographer makes a fresh dance ad libitum. Permanence and impermanence combine. Ephemeral enough in my turn, I have been exceptionally taken by the presence of a definitive musical score in the working studio: it is a fixed notation, key to interpretation.

Complementary to the significance of the printed score, my dancer-tread overlays its composer’s invoked sequences of anatomical and devotional images. These drawings, delineations of searing events and our attempted accommodation with them, do not cry out to me for further depiction, as much as invite a reading of them. Taken sequentially, they might be alternative scores; for dancing.

Icons and Stations benchmark processes and journeys. We could fixate, were it not for our imagination of landscapes through which the journeys pass. Les Heures Persanescomprise spatial impressions; the reading of a travel-diary synthesised into music.

Matthew Hawkins is Royal Ballet School trained. Hawkins’ shift from ballet to contemporary practice involved his being a founder member of Second Stride and Michael Clark dance companies, studying Cunningham technique at source and presenting his own work, including as Artistic Director of Imminent Dancers Group, and Matthew Hawkins Dance Company, and commissions for Dansproduktie Amsterdam, CNDC Angers Szegedi Balett.

Recent recognition for Matthew has come in the form of a Jerwood Choreography prize, a Dance Artists Fellowship from Arts Council England, a Herald Angel award and Professional Development/Choreographic Futures support from Creative Scotland.

“…a display of rare interest, of real choreographic merit, of original and valuable thought about dance: typical Hawkins in fact.”  Financial Times

“…In any other culture Hawkins would be recognised as a kind of genius.”  The Observer.

Matthew’s long term teaching assignments include open classes in contemporary technique at London’s Pineapple studios (1986-99), technique and choreography workshops at CNDC (Angers, France, 1991-2004) and guest teaching with Rambert and Random Dance Companies. Each of his classes is a medium for the act of teaching and learning on some level. At Dance Base (Edinburgh) he has given classes with the professionals, the beginners, the elders and those with special needs.

Red Note performs the established classics of contemporary music, commissions new music, develops the work of new and emerging composers and performers from Scotland and around the world, and finds new spaces and new ways of performing contemporary music to attract new audiences. Within Scotland the ensemble has performed from the Outer Hebrides to the Borders in concert halls, bothies, pubs, clubs and aircraft hangars, amongst other unusual settings. Outwith the UK it has a growing international reputation, performing to great acclaim at festivals in France, Germany, Belgium, Holland and Australia in recent years. The ensemble also undertakes an extensive programme of Access, Engagement and Participation (AEP) work, focusing particularly upon working with younger and older people, people with multiple disabilities, people living in areas of multiple deprivation, and also working to address inequalities of access and representation due to race/ethnicity and gender imbalances. We also undertake an extensive performer and composer development programme within schools, universities and conservatoires nationally and internationally.

Red Note’s work in 2017 includes tours of Scotland, collaborations with the National Theatre of Scotland, performances in Hull and London at the PRSF New Music Biennial, and performing the opening concert of the 40th Huddersfield Contemporary Music Festival with a new commission by James Dillon. Other new commissions for 2017 include works by Gareth Williams, Tom Butler, Maja Ratkje and Kathy Hinde, and Benedict Mason.

Red Note is Associate Contemporary Ensemble at the Royal Conservatoire of Scotland in Glasgow, an Associate Company of the Traverse Theatre Edinburgh and Associate Ensemble of the sound festival Aberdeen. Red Note is a Delphian Records recording artist, recently releasing CDs of music by Eddie McGuire, John McLeod and David Wilde to great acclaim with a 4th CD – of music by Lyell Cresswell – to be released in 2018.